October 29, 2021 – Announced at the Ayala Sustainability Summit last week was the climate initiative collaboration between Ayala’s energy and real estate businesses, a significant milestone toward the group’s collective Net Zero ambition by 2050.

AC Energy (PSE: ACEN) and Ayala Land have signed a power supply agreement for ACEN’s 120 MW solar plant in Alaminos, Laguna to supply renewable energy that will help meet ALI’s demand up to 2050.

This marks a long-term partnership that will advance both companies’ net zero aspirations, eliminating 102,540 MTCO2e per year, or the equivalent of taking 22,291 cars off the road annually. Alaminos Solar is one of the country’s largest solar farms with 120 MW of renewables capacity and the first ever solar storage hybrid locally.

Prior to the power supply agreement, the two companies have jumpstarted their synergies in Alaminos through ACEN’s pioneering Sustainability Hub, where Alaminos Solar is surrounded by Ayala Land’s Carbon Forest, a woodland reserve that acts as a carbon trap and home to biodiversity.

ACEN partnered with Green Antz, a company which also operates Ayala Land’s plastic recycling facility at the Arca South Ecohub, to pilot the circular approach in the Sustainability Hub and integrate a plastic waste management system. A total of 32,540 kg of plastic collected from the solar panel packaging materials in the project construction site, the equivalent of about 25 compact size cars, have been diverted from landfills to be upcycled into eco-bricks and used in building facilities within the plant.

ACEN envisions to recreate the Sustainability Hub and close the loop through the development of Community Eco Hub recycling facilities within its project locations, fulfilling its goal of protecting the environment, creating jobs to reignite the economy, and engaging its host communities meaningfully while creating clean energy.

And with a future Eco Learning Center already underway, ACEN aims to create awareness on various climate action programs such as renewable energy and nature-based solutions through reforestation and biodiversity protection.

“ACEN commits to being at the forefront of energy transition, working alongside with our partners,” said Eric Francia, ACEN President and CEO. “We are happy to work with Ayala Land on this important initiative that will help the Ayala group achieve net zero greenhouse gas emissions by 2050.”

“We are pleased that this transaction with ACEN enables us to leverage synergies across the Ayala group and provides a platform to advance our net zero goal,” said Bobby Dy, Ayala Land President and CEO. “As we strive to deepen our commitment to sustainability, we recognize how these efforts contribute to the shift towards a low-carbon future.”

As climate change takes center stage as one of the world’s most pressing challenges, and countries race to transition from fossil fuels to clean energy towards the post-COVID world, ACEN ensures that sustainability is integrated into its vision and strategy as it works attain its goal of 5,000 MW of renewables capacity by 2025, and become the largest renewables platform in Southeast Asia. 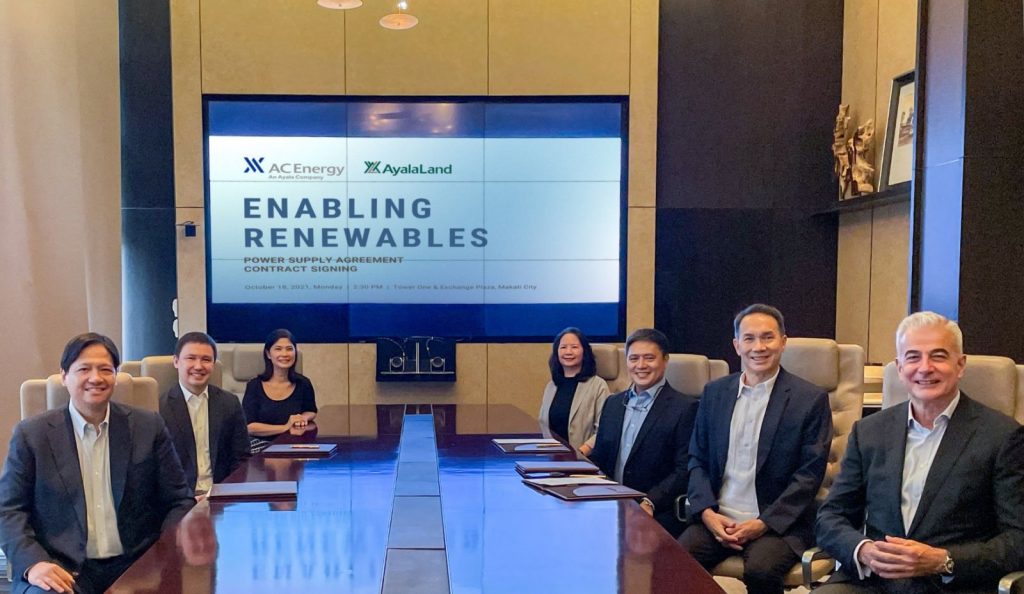